If you move to the Netherlands with your family, your children can benefit from the diversity of the education system there. The freedom of education was already enshrined in the Constitution of 1848. According to this, any group of people with a certain religious, ideological or pedagogical-didactic conviction can set up a school in the Netherlands.

The school landscape here is colourful: There are – for example – Roman Catholic, Christian Protestant, Jewish, Islamic and Hindu, but also Rudolf Steiner, Waldorf, Montessori Jenaplan and Dalton schools. In addition to these special private schools (Bijzondere Scholen), there are public schools (Publieke Scholen), which are mostly supported by the municipalities. There are around 6,000 different school boards in the Netherlands, which employ their own teachers. Similar to Germany, there are also different types of schools here, with many opportunities to transfer schools or change careers. Private and public schools are financially equal. The Dutch state supervises the education system, but does not have a monopoly on education.

The principle of freedom of education in the Netherlands also means that every citizen can decide for themselves which schools their children attend. The place of residence does not play a role at all.

In the Netherlands, there are various offers for the very young: Day care centres, toddler playgroups, host parents or home supervision. You can find out more about the possibilities and local placement from the municipal administration (â€œGemeentelijk Informatie Centrumâ€). Parental contributions for day-care centres, for example, depend on income and are charged monthly. Unlike in Germany, children can go to basic school from the age of four, which is free of charge. Until their children reach this age, working parents often take their children to a â€œKinderdagverblijfâ€ – the Dutch equivalent of the German day-care centre or Kita. This form of all-day care is chargeable, but is subsidised by the state through the â€œKinderopvangtoeslagâ€.

For toddlers between the ages of two and four, there is also â€œDe Peuterspeelzaalâ€. In these playgroups, the toddlers can spend one or more mornings or afternoons a week playing, romping and doing handicrafts together. This model is not intended as a full-day placement. As in the case of the Kinderdagverblijf [daycare centres], parental contributions depend on income. This form of childcare is not subsidised by the state, but is usually subsidised by the individual municipalities.

If your child is living in the Netherlands, they are obliged to attend school in the month in which they reach the age of five. Pupils remain obliged to attend school until the age of eighteen, although this is limited in time in the case of vocational training. In the Netherlands, great importance is attached to compulsory school attendance and punctuality. During primary school, parents must ensure that their child goes to school every day and arrives on time. This changes when the child moves on to secondary school at the age of twelve: Now pupils are responsible for themselves.

Anyone who does not let their child go to school or who regularly plays truant as a pupil risks a fine and more. You can get more information about compulsory education from the municipal administration through the â€œAmbtenaar leerplichtwetâ€ (compulsory education officer).

If you live on the Dutch side near the border and wish your child to be educated (further) in the German education system, you must apply for an exemption at the competent municipal administration. This is usually granted if your child attends a German kindergarten or school. A confirmation from the respective German educational institution is required for this. You can obtain the relevant form from the Dutch municipality.

The first two years of primary education are a kind of pre-school, which children can attend from the age of four. From the age of five, school attendance is then compulsory. Following this regulation, children are enrolled in the current school year. In this way, children are gently integrated into the education system and prepared for lessons in a playful manner. Generally, school in the Netherlands is organised as all-day classes, to which the children can already become accustomed at this stage. In the third school year, the actual lessons begin, which are comparable and roughly the same as the first school year of primary school in Germany. However, the children in the Basisonderwijs study for six years until they complete grade eight. As a rule, they are then twelve years old. Only then is the decision made as to which secondary school offer is most suitable for them. The Dutch basic school is completed with a nationally standardised examination, the so-called CITO test (Centraal Instituut voor
Toetsontwikkeling – Institute for Test Development). The primary school teachers then make their recommendation for one of the secondary schools, taking into account the pupilsâ€™ personal strengths and weaknesses. This report improves the chances of getting a place at the appropriate secondary school for your child.

As there are no school districts in the Netherlands and everyone is free to choose their own school, pupils must register at the school of their choice. Particularly popular educational institutions that receive too many applications are then decided according to their own criteria or by drawing lots.

After completing basic education, pupils go on to secondary schools (Sekundarschulen) depending on their performance and the degree they wish to obtain. In the Netherlands, a distinction is made between three types of schools:

Most MBO training such as construction, engineering, care, social professions and economic professions are taught in regional training centres (ROC). In addition, there are specialised institutions responsible for training in a specific field (e.g. graphic designer). There are four qualification levels offered in the MBO vocational training:

Through the HBO, students receive the theoretical and practical preparation to be able to pursue the employment for which HBO training is required or useful. Graduates work, for example, in the middle and higher levels of industry, social services, health care and the public sector.

Study at a college or university. The characteristic of university education is the link between scientific research and education. The training focuses on academic education, research or the professional application of scientific knowledge.

The Dutch school system at a glance: 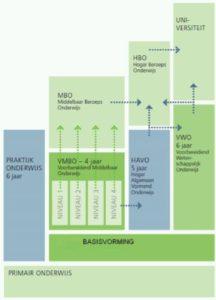 Every pupil in the Netherlands has to take a final examination. These exams vary in content, depending on the pupilâ€™s education. The subjects Dutch and English are compulsory for most exams. The other exam subjects depend on the educational path chosen or the profile chosen by the pupil.

Dutch school and university grades have a range from one to ten, with ten being the top grade. With a grade of six, students have just passed; anything below that is considered poor or insufficient.

School attendance is free in the Netherlands until the end of compulsory education. Pupils and students who are over 18 years of age and therefore no longer subject to compulsory education must pay school fees or tuition fees (“Wettelijk Collegegeld”). The amount of this fee depends on the type of school chosen (MBO, HBO or university). It is readjusted each school year. For the school year/ academic year 2014/2015, the fee for MBO was â‚¬ 1,118, for HBO and university the fee was â‚¬ 1,906. If they are over 18 years of age, pupils and students receive a basic state scholarship at the same time. The assessment depends on whether the recipients of the scholarship live in their parentsâ€™ household or run their own household.

Anyone who completes less than half of the prescribed courses in a year of instruction or study – for whatever reason – has their scholarship automatically converted into a loan for the year in question. The grant must therefore be repaid.

The basic scholarship can be topped up by a performance and parental income-dependent loan, which is comparable to the German BafÃ¶g rates with regard to the maximum funding limit. Pupils and students who are entitled to state funding also receive the so-called â€œOV-kaartâ€, an annual pass that allows them to use all public transport in the Netherlands for free or at reduced prices.

Even though tuition is free until the age of 18, parents in the Netherlands are expected to make annual contributions for excursions, school festivals, theatre performances, replenishment of teaching materials, and so on. The amount of the contribution often depends on the parentsâ€™ income. The average amount is â‚¬ 75 for basic school and between â‚¬ 70 and â‚¬100 for secondary school per year and child.